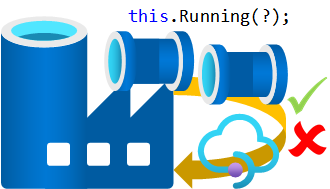 To improve the overall resilience of the processing framework an orchestrator check is done for each new execution to establish if the parent pipeline is already running.

This check is important to avoid any confusion in the metadata current execution table at runtime if a parent has accidently been triggered twice, or to prevent an unwanted previous run clean up cycle occurring incorrectly.

The check is done as a utility pipeline that accepts the following pipeline parameters:

Using the Azure Management API in conjunction with database metadata provided by the GetFrameworkOrchestratorDetails stored procedure the following Activities inspect the framework pipeline runs to establish if an execution is already running (in progress/queued).

If an instance of the provided pipeline/batch name is already running an exception will be thrown, stopping the new instance and forcing a failure status against the parent.

The expressions and filtering take into account the new Run Id then apply filtering to the API pipeline runs results to finally assert if (using a count variable) if the target pipeline is running.

For the Azure Management API calls a set of web activities are used (show above) that authenticate using the orchestrators own MSI to perform the various GET requests.

For the pipeline runs request the default permissions granted to the Data Factory MSI are not sufficient. Data Factory must explicitly be granted access to itself in order to query its own pipeline runs. Details of the request below on the Microsoft docs page.

Hopefully, this is a short-term permissions quirk and bug that Microsoft will correct. However, currently this permissions update will need to be an additional step in deployments of the framework Data Factory.

Currently a workable permissions model for Azure Synapse Analytics is still in progress and management API’s call not fully supported by Microsoft. Therefore, in v2.0-beta of the processing framework checking if the parent pipeline is already running is not supported for a Synapse parent.

The batch execution concept supports the running on multiple parent pipelines concurrently, therefore the above filtering had to be extended to take this into account.

Using the central property table value to establish if the batch execution feature is enabled. The filtering then uses the batch name parameter passed to the pipeline to further reduce the results before doing the final assertion. Logically the following can be stated:

The GET pipeline runs result set is limited to 100 records, therefore if you’ve called the parent pipeline more than 100 times in the last 24 hour period the check filtering will not be able to detect the concurrent execution. This will instead be caught by the exection wrapper stored procedure.

To overcome this potential limitation a custom request body and filter params will need to be provided as part of the GET pipeline runs call.